His father’s carpentry and studies

Second child of three sons Guido Moretti was born in Gardone VT on 12 August 1947 in via Gramsci n. 20. 20. His father Luigi is a carpenter and uses a part of the corridor of the house as a workshop. Only later, thanks to the careful collaboration of his wife Rosa Bettinazzi, did the carpenter Moretti manage to set up a real furniture factory. Growing up in the midst of wood, Guido will always be fascinated by this material: «you breathe it, it enters you. The colors… the smells! I still have the glue in my blood. “
Over school he prefers his father’s carpentry where he has the opportunity to vent his vitality by playing with wood and stucco: this is how “pitotini”, his first sculptures, are born.

In 1959, his older brother Giorgio was sent to boarding school in Brescia at the Istituto Artigianelli and Guido, out of an innate need for escape, was happy to follow him. The college experience is not pleasant but the school allows him to further develop his manual skills.
Back in Gardone VT he enrolled, but only for one year, at the Zanardelli Technical Institute. After that, he successfully sacrifices the whole summer to prepare for the admission exam to the two-year course of the detached section of the ITIS in Brescia which, that year, starts in his country. The three-year period instead completes it in the headquarters. Here, thanks to Professor Cesare Scariolo, he discovers and is captured by the beauty of analytic geometry.

The University, the family and the first sculptures

Having obtained the diploma, the need for freedom and new cultural horizons led him to enroll in the Faculty of Engineering of Padua in 1967. His first work made with plasticine dates from this period. In reality it is a faithful copy of a sculpture (a dead partisan) seen at the Bronze Exhibition in the Palazzo della Ragione. He will do the same thing a few years later in Lumezzane with a sculpture by Vitto Piotti. In 1969, after the two-year period, the restless Guido, thinking of teaching as a future profession, moved to the Faculty of Physics and moved to Milan. Here he starts a family, in 1971 his daughter Chiara is born. For a year Guido worked as a clerk in a middle school while continuing to study for the university. In the Milanese period his sculpture tests intensified: Bust of his wife Silvia,Head of daughter Chiara, Self-awareness, A copy from Manzù, Difficult encounter.
In 1973 he settled in Brescia where he continued his artistic activity, dating back to these years: Harmony of bodies, Solitude, Incommunicability. On 12 December of the same year he graduated in Physics. In January ’74 he obtained his first assignment as an annual alternate in Lumezzane at the San Sebastiano State Middle School. In ’74 -’75 he teaches at ITIS Castelli in the detached sections of Manerbio and Gardone VT. In ’75 -’76 he teaches at the Liceo Scientifico Calini in the detached section of Rovato.

He attends the Loggetta group and follows the drawing and ceramics courses it organizes. When the group disbanded Guido will give life with other artists, including Mario Raineri, Mario Rivetti, Giuseppe Giori, Maria Grazia Filetto and Giuliana Montanari, to the Moretto group that manages the homonymous gallery. The critic Luciano Spiazzi follows the association’s activities with attention and sympathy. Guido organizes and attends the drawing and fresco courses of the painter Gianni Partziale.
His first attempt to escape from the figurative takes place in this period with the egg sculptures, as a moment of research on the positive – negative relationship
In ’76, following the marital separation, he moved to Bovezzo where he still lives. In ’79 he met Graziella Malgaretti. In ’81 he taught at the same time at Pastori and Gambara in Brescia, then at Moretto and finally at ITIS Castelli where he remained until his discharge in 1991.
With Homage to Freud, the figurative period that had helped him so much in self-seeking. Now, and he says it himself: “Sculpting is equivalent to rejoicing, to play”. The stratifications that testify the new artistic phase of the sculptor will be exhibited in Brescia in the AAB gallery in 1985.

From the 90s to today

In ’86 Guido married Graziella. Your creativity never stops: from the stratifications it passes to the rotations (The golden sphere, The birth of the cube) and finally to the orthogonal intersections (Quarchio, Damped Sinusoid, Square Spiral). Meanwhile, Raffaele was born in 1989 and Guido created the sculpture Maternity.
In 1990, on the occasion of the exhibition at the Nanni gallery in Bologna, Guido met the critic Giorgio Ruggeri who encouraged him in his research and accompanied him with valuable advice.
In 1991 the fruitful and stimulating collaboration with the Sincron cultural center of Armando and Wanna Nizzi of Brescia begins.
Another very significant meeting for Guido was the one with Romano Piccichè, a late friend, at the VII Italian Contemporary Art Exhibition in Florence in ’92. The critic will publish a long interview in August ’93 in the “Giornale di Sicilia”.
In December of ’95 the magazine “Brescia Ricerche” dedicates the cover of n. 12; in June 1996 he published one of his articles Sculpture by separation – Information technology and cutting-edge technologies at the service of sculpture. Since 1996 he has been collaborating on an ongoing basis with Anna Canali’s Art Struktura gallery in Milan.
Guido Moretti still lives and works in Bovezzo on the outskirts of Brescia. 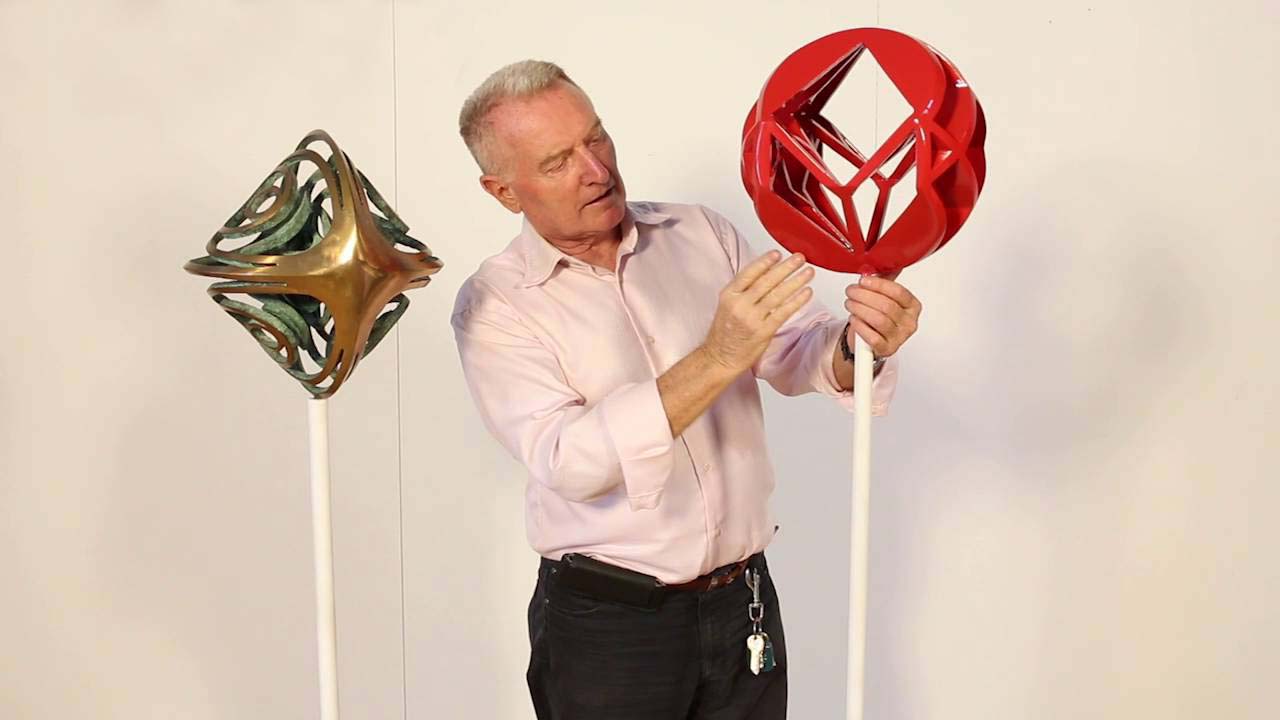 The Syrian artist Sami Burhan from Aleppo, whom I met at the Sincron Gallery in Brescia, struck by my original way of making sculpture, invited me to his home, in Syria, to create models of works starting from his “drawings-written in Arabic “.
I must say that from an artistic point of view, the operation has given exciting results. Sami is an Arabic alphabetist and manages to organize letters and words in an exciting way.
The transformation of these “writings” into “sculptures”, with the method of orthogonal intersections, turned out to be very interesting. Some models were exhibited in an exhibition at the “Pays de Cham 1989” gallery at the CHAHBA CHAM PALACE in Aleppo. 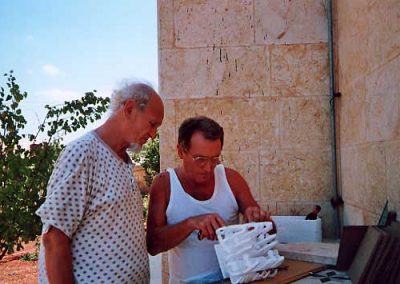 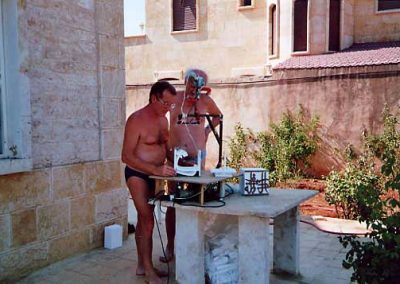 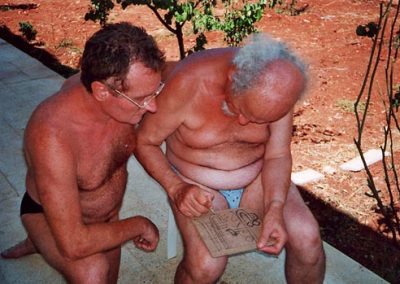 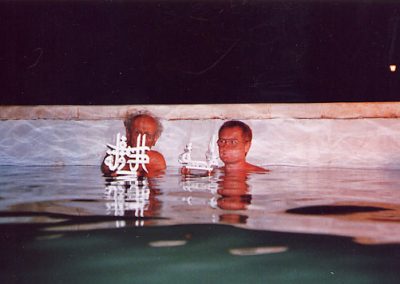 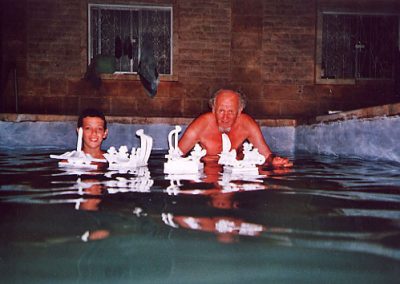 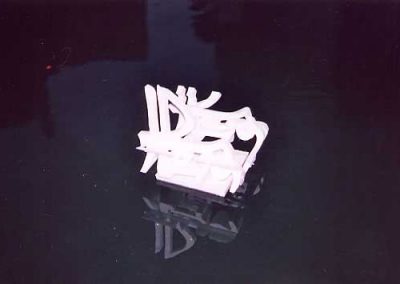 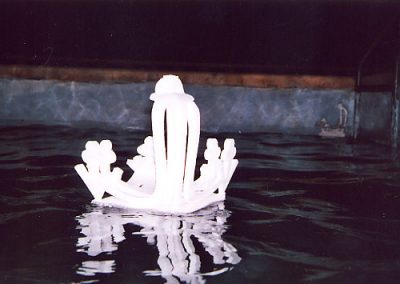 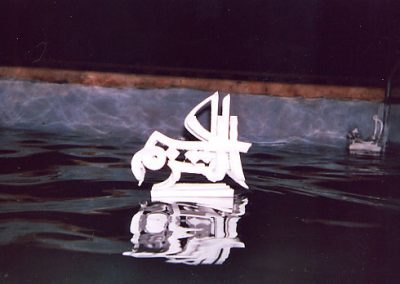 The experiences with school children proved to be very exciting, in 1996 in Bovezzo and in 2006 in Sarezzo. Each child was invited to create a drawing respecting some simple rules that would allow it to be transformed into a sculpture. Subsequently these designs were brought onto the plywood and cut out with the openwork. At that point we moved on to the phase of transforming the drawings into sculptures. Each child could choose whether to intersect only his drawing in space or to cross his own with that of another child. In the end, each pupil colored his sculpture with acrylic colors. 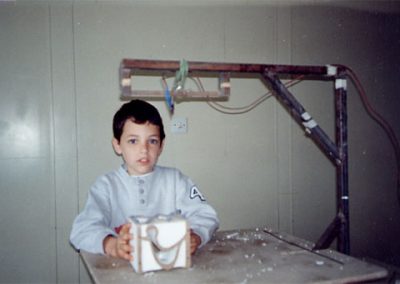 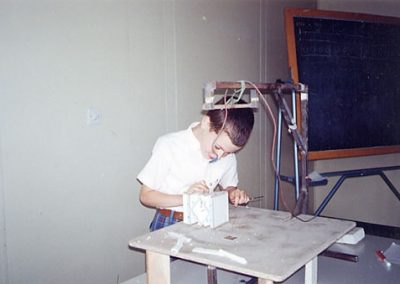 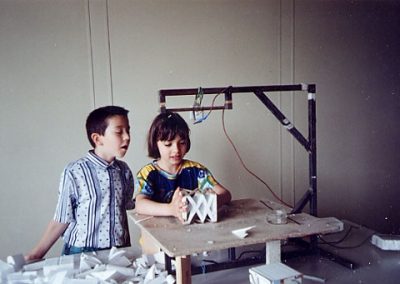 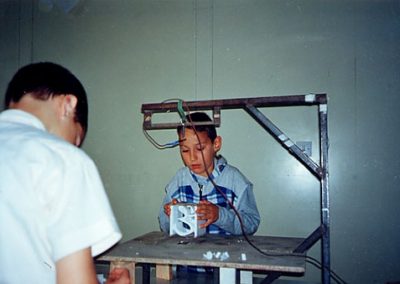 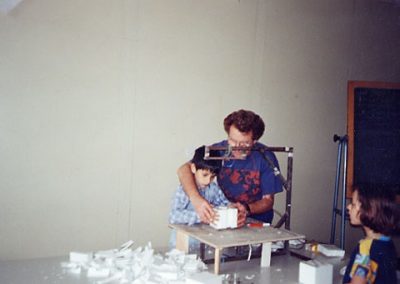 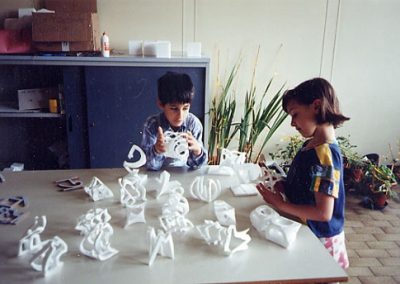 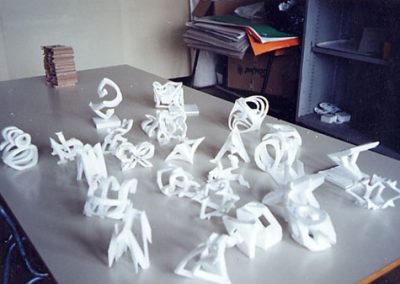 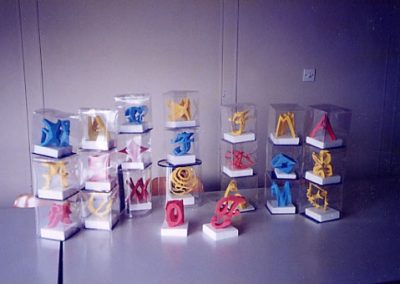